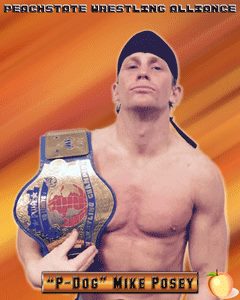 Peachstate Wrestling Alliance had their work cut out for them last night in Carrollton.

They were coming off of their highest profile shows of the year, the 7th Anniversary show featuring Survivor Games and the July 4th event featuring a 60 minute Ironman match between Jimmy Rave and Tyson Dean that his being heralded as one of the best matches of the year. Rave defeated Dean in that match to climax his quest for the PWA Heritage Championship.

In addition, it was not the strong of show on paper. A number of PWA’s top stars (Rave, Dean and Dusty MacWiliams) were not on the card. The main event was a Bunkhouse Battle Royal, not exactly my favorite gimmick match.

Given the above limitations, it was a perfectly decent show. The task at hand was building a challenger for Jimmy Rave’s first title defense on August 15. “P Dog” turned out to be that guy, and he was booked super strong. Be that as it may, I don’t think anyone in their right mind believes that P Dog will be taking the title from Rave next month, and there’s no obvious strong challenger other than Dean, who is out of the title picture for the time being (read on).

Chosen Two lost the tag titles to Rick Michaels and Iceberg in the best match of the night. That leaves babyfaces in possession of all of the PWA titles.

Attendance at Central Elementary was 120. It was no surprise that the crowd was down, but I doubt promoter Shane Noles expected it to be that low. PWA did 375 for the anniversary show and 225 for July 4. There’s another factor in play here, as there are just too many wrestling shows running in the West Georgia area, many of them of suspect quality.

Booker Rick Michaels has been on a roll, booking multiple promotions with positive results. It will be interesting to see what magic Michaels can work in the face of the challenges he faces at Peachstate, especially in shoring up a relatively weak heel side.

“Investor” Al Getz entered the ring to a “you got beat” chant. Getz admitted their emotions got the better of them after the match when Dean punched him the face. Dean had subsequently asked to be released from his contract. Getz said that wasn’t happening, because he made money every time Dean wrestled. Furthermore, Getz was refusing to exercise Dean’s rematch clause because Dean wasn’t ready. Getz said Dean would have to work his way up from the bottom. He was the boss and he would decide when Dean was ready, not PWA owner Shane Noles not Commissioner Rick Michaels and certainly not the idiots in the crowd. Getz said he was hunting for new talent and Rave was a marked man. The fans chanted “we want Tyson” and “go home” at Al. This was a very effective promo by Getz. It got bigtime heat and more importantly, it advanced Dean’s babyface turn. Getz is a superior talker to his predecessor Akbar and better fit for the role.

(1)Tommy Too Much defeated Stupid to retain the NWA Georgia Heavyweight Championship in 6:40. A battle or superheros in the gear department – T2M with a Spiderman theme and the word “poison” emblazoned across his back, and Stupid, an improbable Man of Steel wearing a Superman t-shirt. T2M immediately launched an all-out attack, running his mouth as he went. Stupid charged, speared the post and tumbled to the floor when T2M stepped aside. The onslaught continued until T2M missed a leg drop. Stupid got a close near fall with a hangman’s neckbreaker. T2M applied a sleeper. Stupid countered with a back suplex to regain the advantage. It was short-lived, as T2M pinned him clean in the middle with an X Factor.

(2)”P Dog” Mike Posey defeated Eli Daniels in 5:38. P Dog dominated Daniels in all facets of the game and was a real jerk about it. There was no water in the pool for Daniels’ top rope splash and P Dog pinned him with the Alabama Jam. It was the decisive win Posey needed in this spot.

Getz came out and asked P Dog if he wanted more gold – gold belts, gold records, gold chains and maybe some gold grillz. All he had to do was sign on the dotted line. P Dog said thanks but no thanks. “I don’t need no white boys in my business.”

(3) Iceberg & Rick Michaels defeated The Chosen Two (Sal Rinauro & Nigel Sherrod) to win the PWA Tag Team Championship in 18:10. Rick was in Kevin Owens tribute mode with his gear, just to piss Sherrod off (Sherrod is not a fan). Early on, it was stalling and shenanigans from Chosen Two. Once the action got underway, Rick was on fire. He must have been feeling pretty spry. Rick gave the champs the meeting of the minds and busted out Owens’ push up powerbomb for a near fall. It looked like Rinauro’s eyes were going to pop out his head after he took a massive leg drop to the belly from Berg. It was all Rick and Berg until Rick took a flying crotch bump on the turnbuckle ala former partner David Young. Sherrod added insult to injury by dropping Rick’s crotch on the rail. Chosen Two worked over Rick’s leg. The crowd broke out a classic Nashville “go Rick go” chant. Rinauro screwed up, allowing Rick to make a diving tag to Berg…stellar feeding and bumping for Berg’s punches by Chosen Two followed…Berg then tburied Sherrod with a flying elbow drop but Rinauro broke up the pin. Chosen Two managed to pull off a double suplex on Berg, but they went overboard celebrating their feat of strength and Berg made them pay. Referee Terry Hudgins got bumped in the one glaring bad spot of the match, as the set up was awkward as hell. Rick hit the Double Shot on Sherrod, but was superkicked by Rinauro. Referee Triston Michaels hit the ring to make the count and Rick kicked out at two. T2M ran to ringside and rolled Hudgins back into the ring. Stupid chased T2M to the back. Sherrod tried to clobber Rick with the Chamber of Commerce award plaque (stolen from Noles), but Rick cut him off and hit the Double Shot for the 1-2-3. This match worked beautifully. There was plenty of action, but they didn’t do too much and gave what they did do time to register. Rinauro was especially great. Since his return to the Georgia indy scene, Rinauro’s work as a heel has been a delight. There’s much to learn from the way he uses facial expressions, and his willingness to sell and bump big instead of trying to be cool.
Postmatch, Chosen Two argued and hugged it out.

(4) Fry Daddy defeated Jason Collins to retain the PWA No Limits Championship in 14:27. Collins showcased his wrestling skills and let everyone in the building know just how good he thought he was. Fry Daddy fired up with a vengeance, unleashing a barrage of chops that had Collins looking for cover. When Fry went to the top rope, Collins shoved him off and down to the floor. Collins called for referee Stan Robinson to count Fry out and fanned his beet-red chest. Collins went to work on Fry’s neck. Collins frustration mounted as Fry’s toughness came to the fore. Fry caught Collins with a sky high powerbomb to spark his comeback. Collins showed he was no slouch in the resiliency department, as he kicked out of Fry’s signature moves and hit an exploder suplex for a near fall. Fry kicked out a sweet variant of the full nelson slam. Collins went for it again, and Fry countered with a stunner for the win. Good match. Both men worked hard. Collins is very talented in the ring and works the crowd well. Fry Daddy has totally won the PWA fans over with his charisma and boundless energy. That said, they could have heightened the drama leading into the finish by doing less and selling more.

(5) P Dog won a 16 man Bunkhouse Battle Royal in 11:23 to earn a PWA Heritage title shot on August 15. Order of eliminations: Collins, Brit Johnson, BY, Donnie Primetime, Daniels, Sherrod, Joey Sparks, Iceberg (via Posey pulling the ropes down), Clint Matthews, Rinauro, C-Dawg, Rick Michaels, Romeo, Ace Haven and Stupid. Weapons included pizza pans, kendo sticks, a piece of PVC pipe, a spatula, a cane and a mop. The comedy high point was Rick smushing a frozen pizza into Rinauro’s face. A titanic struggle between Haven and Rinauro to stave off elimination concluded when Haven whacked Rinauro with a pizza pan. Amy Haven removed Romeo’s ankle weight (the better to keep him from being thrown over the top don’t you know) so Ace could toss him out. Romeo pulled Haven out. Posey pulled the ropes down to eliminate Stupid. Match was OK. The bar for gimmick matches was pretty high. It paled in comparison to the Survivor Games or the wild streetfight on May 16 show.