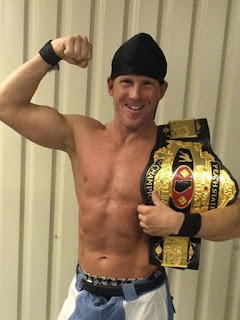 An unlikely new Heritage Champion emerged from a 25 man royal rumble in the form of “P-Dogg “ Mike Posey, who now moves on to face an unlikely challenger on January 7.

Everything about this show tied back to the rumble in some form or fashion (all except a surprisingly good loser leaves PWA match between Pandora and Merica Strong). The rumble was a roller coaster ride of twists and turns leading the final outcome.

There’s rarely a dull moment with the booking minds of Rick Michaels and collaborator Shane Noles. The pattern is there is no pattern.

Attendance at a chilly VFW Fairgrounds was 180. Peachstate rarely drops below 200. With Christmas Eve falling on Saturday night this year, Peachstate couldn’t run their usual holiday weekend show. The crowd was probably down due to the change and coming back just two weeks after the big Thanksgiving show.

Bill Behrens led his Kingsmen (Tommy Too Much, Logan Creed, Gladiator Jeremiah, Kyle Matthews, Merica Strong and slimeball referee Triston Michaels) to the ring to the strains of “I Gotta Be Me”. BB said he was the only undefeated athlete in PWA this year after beating Pandora (via substituting Kyle Matthews) and beating former NWA World Tag Team Champion Rick Michaels (via shenanigans) “and I could probably beat myself with one hand tied behind my back.”

BB claimed Triston was debased and mistreated by Sal Rinauro at Thanksgiving Turmoil. “Just when you expect it the least, the Kingsmen are going to mess with your life.” BB predicted Pandora would be history after tonight, and Creed “the largest insurance policy in PWA” would defeat Jagged Edge to earn the right to be last man in the rumble. BB said the Kingsmen were already greater than the Four Horseman and all of the titles in PWA would be theirs.

Next thing you know, BB will claim Linda McMahon his hiring him to be here assistant at the SBA. This was another tremendous promo from Behrens. The more he talked the more pissed off the people got.

(1) Logan Creed (with Triston Michaels) defeated Jagged Edge in 7:40 to earn the spot as the 25th entrant in the mega rumble. Creed dominated right from the get go with additional help from Triston. High impact moves and multiple near falls ensued. Jagged finally got untracked with a superkick and a uranage for a close near fall. Jagged escaped Creed’s goozle and hit a neckbreaker for two. But distraction by Triston set up the Creed’s full nelson face plant for the win. A solid opener. By virtue of the loss. Jagged was relegated to the first spot in the rumble.

(2) Shane Noles and P-Dogg (Mike Posey) wrestled to a 10 minute draw. P-Dogg’s rap never got off the ground. Noles' music cut him off. P-Dogg was having his way with Noles for the first seven minutes of the match with arrogance oozing out of every pore. Noles hit a powerbomb and switched to a Boston crab with the crowd chanting for the top out. Noles continued to torture P-Dogg with submissions until the time limit expired.

Noles said he heard P-Dogg give up at least three times. “I’m this close to beating you and getting to where I want to be in this business.” Noles wanted five more minutes.

P-Dogg counter offered – a 30 minute Ironman on January 7. Noles said fine with him AND he would see P-Dogg in the rumble.

(3) Chris Spectra defeated Marcus Adams in 7:03 to earn a spot in the rumble. Adams ran his mouth about beating Spectra and taking his spot in the rumble. Spectra’s happy go lucky entrance got a respectable pop. Spectra had the early advantage. His offense looks more technically sound of late as long as he doesn’t throw punches. There were a few ragged spots in the back and forth and they lost the crowd a bit. Adams got a near fall with an awkward discus lariat. Spectra won it with a sick kick. Not a bad match, a couple of minutes shorter would have been better. I have no idea what’s up with pushing Spectra but there’s usually a method to Rick Michaels’ madness.

(4) Pandora defeated Merica Strong in a loser leaves PWA match at 8:21. Strong hid out by the entrance, jumped Pandora from behind and gave her a beating. It was a different story once the bell rang. Pandora was on fire. She chopped the shit out of Strong, who raked the eyes to get the upper hand. Strong showed more of a vicious streak, using a backbreaker where she drove her elbow into Pandora’s throat. Strong no sold Pandora’s forearms and kicked out of a reverse DDT at one. Strong broke out a superplex but Pandora kicked out her crawling cover. Strong put Pandora in the torture rack. Pandora was in dire straits but reversed into a DDT and both were down. Pandora was in disbelief when Strong kicked out her short DDT. Moments later, Pandora hit sliced bread for the 1-2-3 and huge pop. They sold and let the big moves sink in. Strong still has the occasional pregnant pause but this was by far the best match I’ve seen from her.

(5) P-Dogg won a 25 man rumble royal to become the new PWA Heritage Champion in 49:23. Amy Haven was at ringside with Jason Boyd to draw names. Jagged eliminated Zachary Blane before Behrens entered at number three. Rick Michaels came after Behrens ready to torch him with a fireball. BB ran for his life and crawled to the back. Triston said it wasn’t fair. Commissioner Eddie Layne agreed and said Triston would either take BB’s spot or YOU’RE FIRED! Sean Christopher entered fourth. Jagged powerrbombed Christopher’s ass and tossed him out. Triston pulled the ropes down to spill Jagged out. Number five was Noles with fire in his eyes. Triston tried to run. Noles grabbed Triston and deposited him over the top rope. Ace Haven, Jimmy Rave , Michael Stevens, Romeo, Jacob Ashworth, Sal Rinauro, Spectra and Donnie Primetime III (new gear, better look) entered with no eliminations taking place. Competitor number 14, Kevin Blue took a seat at ringside. Noles and Spectra forced him into the ring. Zac Edwards entered and saved his Besties partner from elimination. P-Dogg was next. AJ Steele got the loudest, longest entrance pop of the match and made quick work of the Besties. Rave and Romeo were eliminated. I didn’t catch how. Blackheart, Drew Adler and Trevor Aeon were the next three entrants. Spectra dumped Blackheart and Aeon. Ace got rid of Spectra. CB Suave was next. The deck was suspiciously stacked in favor of the Kingsmen as they had the final four entrants. Tommy Too Much took his time and carefully picked his spot to get in the ring. T2M eliminated Noles and DP III before Steele got a hold of him with a testicular claw. Gladiator and Kyle Matthews joined the fray. Kingsmen triple-teamed Steele until Creed made his grand entrance at number 25. Steele broke free and immediately clotheslined Creed over the top, a nod to Hogan/Warlord in the 1989 Royal Rumble that got a monster pop. Rinauro eliminated Adler. Suave eliminated Matthews. Blue took Suave out with a Yakuza kick. Rinauro eliminated Jeremiah. Meanwhile, Steele busied himself kicking a field goal with T2M’s jewels. Blue eliminated Ace. Rinauro sent Blue out with a superkick.

Steele gave T2M the heave-ho, but the refs were breaking up a fight between Ace and Blue and missed it. T2M went back into the ring and threw Steele out over the middle rope. Seeing Steele on the floor, the refs said he was eliminated. Ashworth lied his ass off and said he didn’t see what happened. Rinauro then clotheslined T2M out of the match. Steele beat on T2M all the way to the dressing room.

Commissioner Layne came out to inform P-Dogg that his first title defense would be on January 7. The Ironman match with Noles was still on and it was now a title match.