From the bottom to the top, last night's Peachstate Wrestling Alliance event at Central Elementary was one of the most satisfying shows the company has produced.

There was something for everyone and every segment mattered. Not  a clinker or a stinker in the bunch.

Nothing could have been further from the truth. The proof of the pudding is in the eating, and the fan reactions last night left no doubt that they are 100% buying into the PWA product. This crowd was hot for everything. The storytelling was some of PWA's best. The collaboration between booker Rick Michaels and promoter Noles has never been more in synch.

The angle and double turn from the last show played out amazingly well.  If you wanted good wrestling, you got it with Jimmy Rave vs. Tyson Dean, Kyle Matthews vs. P Dog and Fry Daddy vs. Kameron Kade. A lighthearted Mexican minis match harkened back to the days when wrestling cards often featured one "special attraction".

PWA strayed away from the VFW Fairgounds for this show and had to be happy with  drawing 250 at the new venue. An elementary school seemed like a questionable choice, but the gym at Central works great for wrestling. The intimacy of the confines intensifies the atmosphere and the metal roof makes it super loud. Now if they can only get the AC to work.

(1) Fry Daddy defeated Kameron Kade in 10:40. This was a strong opener. They established the credibility of the wrestling and it had heat. Fry Daddy is over big and Kade did what he need to do as a heel. Both of these guys have improved dramatically with Kade being further along in the process. A missile dropkick was the spark for Fry Daddy’s comeback. The stinger splash-bulldog combo that Fry always uses is a nice idea but Stinger splashes by small guys are problematic. Fry  broke out a plancha suicida. Kade thought he had it won with a tiger bomb. Fry also kicked out of Kade’s discus elbow-release german suplex- superkick sequence. Match had a killer finish. Kade went for a diving headbutt and Fry caught him with a cutter on the way down. Good win for Fry Daddy.

Noles called out MacWilliams, who was greeted with huge heat and massive “traitor” chant. From the safety of ringside, MacWilliams explained that his issue with Noles went back two years, when Noles gave Rick Michaels a Heritage title shot that was supposed to be his. Noles said after Dusty was out with a serious injury and was considered a liability; he took a chance on Dusty when no one else would.  MacWilliams countered that PWA was his rightful home and he had to ask to come back.  Noles said he was willing to let bygones be bygones if MacWilliams would shake his hand.

The Chosen Two came out to accompany MacWilliams into the ring. Sherrod was carrying Noles’ plaque from the Chamber of Commerce. Noles said this didn’t concern Chosen Two and informed them they were defending the tag titles against Ace Haven and Iceberg later in the evening. Noles jetted out of the ring and left three heels in the ring with their thumbs up their asses.  The segment didn’t go as planned do the technical snafu, but they got the important points across. Noles’ background in live theater really came in handy as he was able to make himself heard without a mic.


(2) P Dog (Mike Posey) defeated Kyle Matthews to retain the No Limits Championship in 15:11. The PWA Junior Championship morphed into the No Limits title. Ring announcer Jason Boyd reminded us that there are no time limits in No Limits title matches.  This match almost had to be good and it was.  Matthews worked leglock submissions early. P Dog used multiple hotshot variations to get out of tight spots. P Dog’s crotch was in fire after a missed firecrotch guillotine leg drop. They went back and for the near falls off big moves.  No water in the pool for Matthew’s top rope splash, but he managed to kick out of P Dog’s RKO variant. P Dog went up top for the Alabama Jam, but Matthews crotched him on the turnbuckle and nailed him with a slurpee kick.  Matthews was looking for a superplex. Posey fought it off and hit the Alabama Jam for the pin. I wondered about P Dog winning clean here, but it did reinforce that he is legit championship caliber wrestler and not just a comedy character.

(3) Ace Haven (with Amy Haven) & Iceberg defeated PWA Tag Team Champions Chosen Two (Sal Rinauro & Nigel Sherrod) via DQ in 18:10. Chosen Two retained the titles on the DQ.  The champs were shitting bricks and bailed clutching their belts.  They tried to walk out and were driven back to the ring by Noles.  Neither Sal or Nigel was willing to start with Berg, so he let Haven have the honor. Sal outwrestled Haven and was feeling really good about. Berg tagged in when Sal was looking the other way. Hilarity ensued... 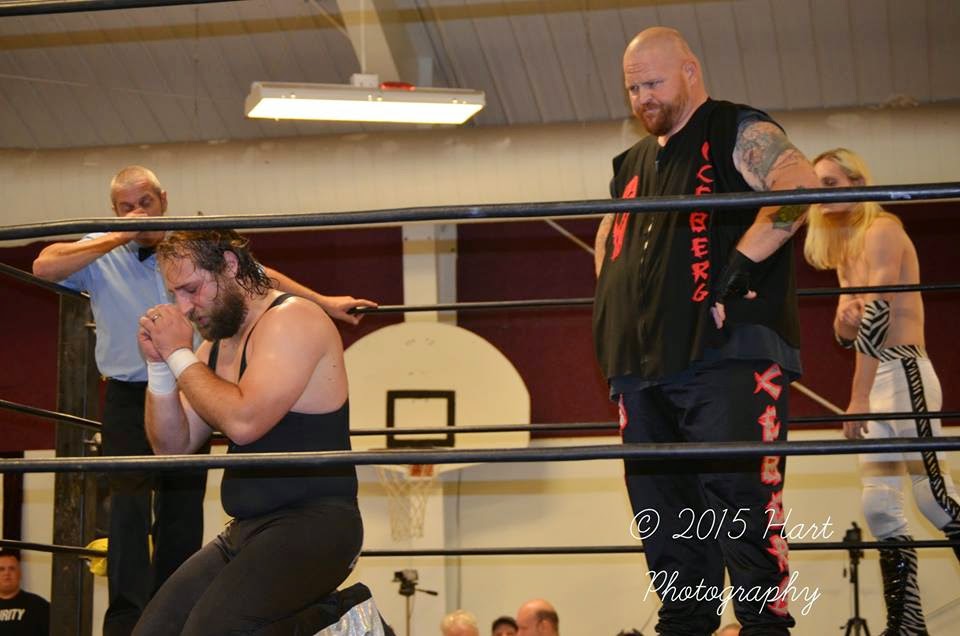 Iceberg leveled Chosen Two with shoulder blocks. Sal made an unwanted tag to Nigel, and Iceberg abused him. Nigel was a bumping machine.  Berg even busted out the Abdullah flying elbow~!  Haven got a near fall on Nigel with a rocket launcher crossbody and another on Sal with a wheelbarrow stunner. Nigel dropped an elbow on Sal trying to make a save.  MacWilliams made his way to ringside and Chosen Two capitalized on the distraction.  Chosen Two did  a number on Haven with help from MacWilliams. 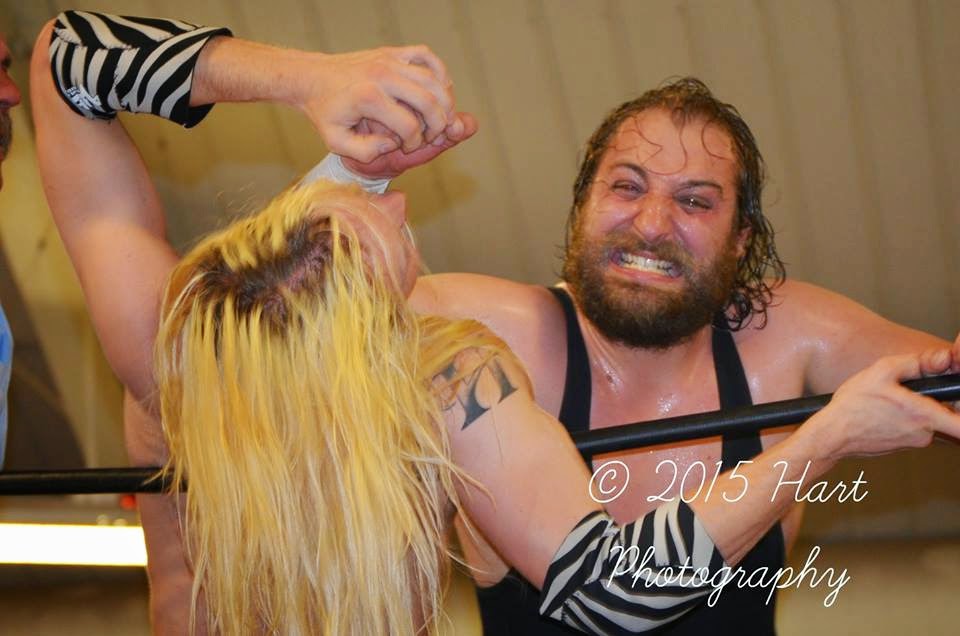 Haven is super over. Seven “Go Ace Go” chants I was told.  A comedy of errors led to the hot tag to Berg. It was pleasure to watch a team that knows how feed and bump. Berg squashed Sherrod with a belly to belly suplex and Rinauro made the save.  When Iceberg tried for the cannonball, MacWilliams pulled Sherrod out of harm’s way and attacked Berg. They did a superb job of telling the story. I had forgotten how awesome Rinauro is as a heel. His facial expressions are gold.

Noles called a halt to the pandemonium and announced a six man tag for May 2.  Haven and Iceberg clearly needed a partner.  Out came Michaels with fire in his eyes. Rick said he resigned as commissioner but he never said he was leaving. Noles handed Michaels his boots. Michaels told the crowd where he was going to stick said boots on May 2. Michaels hit the ring. The heels fled and huddled up. Michaels said let’s go right now. The heels faked like they were going to take the bait but they weren't that stupid.

(4) Mascarita Sagrada defeated Octagoncito in 10:26. These were the genuine Mexican minis that had WWE runs in the mid 90s. Octogoncito kept going for Sagrada’s mask. They did comedy stuff with referee Triston Michaels as their patsy. Rigor mortis appeared to set in on Mascarita after a splash from Octagoncito. Sagrada’s spinning headscissors sent Octagoncito to the floor. Sagrada followed with a dive off the apron. Back inside, Sagrada gave Octagoncito a press drop and rolled him up. They didn’t do anything spectacular (Sagrada is now 50 years old), but  they were very entertaining and it was it treat just to see them live. 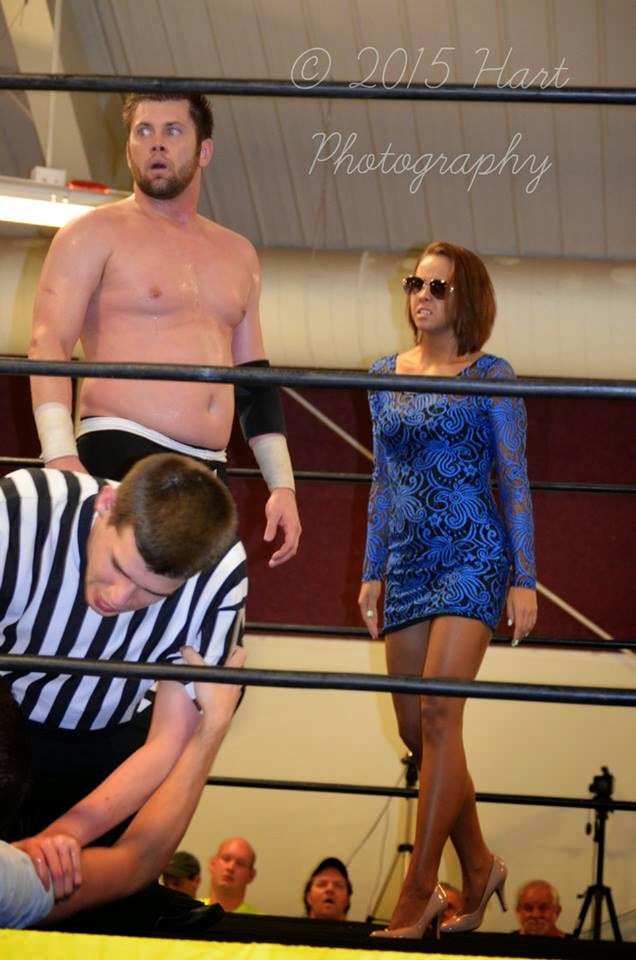 (5) "The Reflection of Perfection" Tyson Dean (with Prince Akbar & Miss Brook) defeated “Savior of Pro Wrestling” Jimmy Rave to retain the PWA Heavyweight Championship in 18:15. Rave earned the title shot by winning the Battlebowl.  The pop for Rave’s entrance caught me by surprise. I didn’t realize how well his babyface turn had taken. Dean was being very deliberate but it wasn’t working. Rave was outwrestling him, and Dean was losing the mental game as well.  At the five minute mark, Rave missed and went flying over the top rope. Dean pounced on the opening. Dean concentrated his attack on Rave’s back, using a tenacious bearhug to wear Rave down. Rave finally mounted a comeback with filled with babyface fire and wicked chops. Dean was hanging on by a thread. Dean kicked out of Rave’s signature STO. Dean almost got the pin with a belly to belly suplex. Rave had the Dusk Til Dawn till Dawn satellite crossface locked in when Romeo hit the ring. Rave cut Romeo off with a clothesline. While referee Triston was dealing with Romeo, Brook got in the ring and slapped Rave.  Rave grabbed Brook. Akbar took a run at Rave but Rave tossed Brook into the path of Akbar’s forearm.  Dean took advantage of the confusion to surprise Rave with a small package.  Good match. Sound psychology all the way through. Rave continues to add to the impressive body of work he had compiled over the last year. The spot with Brook and Akbar looked believable and got a great pop.

Postmatch, Noles came out to remind Rave that he had a second title shot coming by virtue of winning the Lethal Rumble back in January. Meanwhile, Rave locked Akbar in the crossface and bailed out with the title belt before Dean and Romeo could get to him. Rave said he might have pulled the same stuff Dean did if he was a desperate man. Rave said the title looked so good in his hands that he was cashing in his shot on May 2.