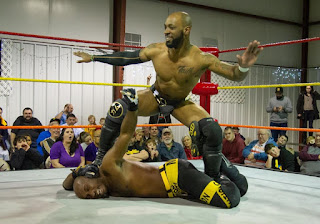 ACTION Wrestling ran their first show of year, the seventh show since the company came into being April 2018, at the Roger Spencer Community Center in Tyrone.

As was true of ACTION’s December event, the show was plagued by a string of lineup changes along the way, some early and some very late in the process. MJF, Sonico, Ike Cross, Teddy King, Tripp Cassidy were all scratched from the original lineup. Hell, even ring announcer Scott Hensley ended up missed the show due to car trouble.

As was also true of the December event, promoter/booker Matt Griffin and company managed to put on a really fine wrestling show despite adversity.

It wouldn’t be ACTION Wrestling without great matches and this show had two of them – Slim J vs. Anthony Henry and ACTION Champion AC Mack vs. Cam Carter.

All of the plot developments came across clear and strong, last minute adjustments notwithstanding. There were more talk segments than on previous ACTION shows and the talking proved to be one of the best things about last night.

The biggest name on the show was Stevie Richards, who was everything a promotion could ask for in a special guest superstar.

The show was well received by a crowd of 230 with all proceeds going to benefit the Make-A-Wish Foundation of Georgia.

My day was made by Tyler’s Wish Reveal, held earlier in the day. It was a full blown mini-show featuring Tyler aka Super Nova making his pro wrestling debut. The Reveal was an incredible event- moving, uplifting and humorous. Everyone at ACTION went all out to make it special. A separate report on the Wish Reveal will be forthcoming.

(1) Bobby Flaco pinned Harry Zen with a slingshot tornado DDT at 8:52. This was babyface vs. babyface with the crowd favoring Flaco. His work ethic and energy have gotten him over with the ACTION fans. Zen is a rookie out of the Create-A-Pro Wrestling Academy in NY. His deal is using a Zen meditation pose to unnerve and disarm his opponents. They had a good match, fast-paced and innovative. At one point, Flaco posted Zen without provocation. The crowd gave him a pass. Zen landed horribly on a high crossbody to the outside but continued like it was nothing. I bet he’s feeling it today.

Fred Yehi said he was quite conflicted. His life was peaks and valley. He got a cold feeling when he looked at the corner where Arik Royal slammed him through a table two month ago. Yehi said Royal wasn’t there but had put a $2500 bounty on his head.

Ashton Starr said he heard about the bounty and talked about what he could do with $2500. He could buy Yehi something other than that trashy jacket or something important like talent. Yehi decked Starr with a forearm. Starr departed but not before Jaden Newman and Cain Justice showed up try for the bounty. I surely hope ACTION has not seen the last of Starr’s obnoxious presence.

(2) Cain Justice & Jaden Newman defeated Matt Sells & AJ Gray in 8:22. Gray was the standout here. Everything he did on offense looked crisp. Sells used a shining wizard and the Double Shot before the heels got heat on him. Tag made. Newman got turned inside out by Gray’s clothesline. It looked like curtain for Newman when Justice pulled Gray out of the ring. Newman then pinned Sells with a flying crucifix. I don’t believe Newman was the legal man.

Aja Perera came out to do commentary for the women’s match.

(3) “The Short Fuse” Dani Jordyn defeated Allie Kat in 7:59. Jordyn accepted Kat’s handshake. Kat displayed her catlike tendencies. A nice counter wrestling exchange led to a Jordyn superkick. Jordyn then slammed Kat’s head into the turnbuckle. What did Kat do to deserve that? Simultaneous pump kicks left both women down. They slugged it out. BIG clothesline by Kat. Jordyn escaped from a Kat’s powerbomb attempt and called for the a falcon arrow but Kat cradled her for two. Kat charged and Jordyn hit a black hole slam to score the pinfall. Match was good. Kat outclassed Jordyn as a performer, which was not the ideal scenario for ACTION.
Perera raised Jordyn’s hand then backhanded her to the mat before laying her out with a hammerlock DDT. Perera sarcastically congratulated Jordyn on being one of the boys. She beat the boys and now she was going to beat Jordyn.

This was great. Perera turned heel for the first time in her 5 year career in and looked like a star in doing so. She's got the attitude down right out of the box.

(4) O’Shay Edwards & Alan Angels & David Ali defeated Ryan Rembrandt & James Bandy & Stevie Richards in 14:25. Richards stopped to talk with Super Nova on his way to the ring. Richards is intremendous shape for his age. Make that any age. Consistency across promotion was evident as the heels (Edwards, Angels and Ali) are all part of the New Era faction running roughshod at Southern Honor. They took turns getting offense on Richards, raising question about whether or not he still had it. Richards’ comeback erased all doubts. The heels isolated Rembrandt. When Edward tried for a stalling suplex, Rembrandt turned it into a DDT and the hot tag was made. Richards had Ali pinned with a sidewalk slam but Angels made the save. The match broke down with all six men battling. Bandy pinned Ali with a spinning suplex that looked amazing. Along with Flaco, Bandy is a talent ACTION has been nurturing from day one and those investments are paying dividends.

Richards thanked the ACTION superstars for teaming up with him. He said this wasn’t easy to do at almost 50 years and thanked Super Nova because he couldn’t have done it without him, adding that the fans were the real heroes that inspired him.

Yehi did another promo stating he was feeling paranoid because wrestlers were stalking him for the bounty, but he had been taking his anger management classes faithfully and was going to turn a negative into a positive. He challenged Arik Royal to a falls count anywhere match at the next ACTION event on March 22 at Sandy Creek High School.

Anthony Henry came to the ring after the $2500 but was pulled off the apron by Slim J…they brawled…leading to….

(5) Anthony Henry defeated Slim J in 15:21. The benefit of Henry’s EVOLVE experience is really showing in his work. He’s slowing down to let each move register and make much better use of facial expressions. Henry’s methodical dissection had Slim sucking for air. His powerbomb counter to Slim’s huracana rana looked devastating. Henry used the STO on the ring frame ala Jimmy Rave. Slim almost had Henry pinned with Screwdriver on the Rocks. Henry made escape #1 from Anger Management. Slim no sold the pain of Henry’s stiff strikes and tore his shirt off. Both were down again after an outrageous exchange of high impact moves. Slim kicked out of a top rope double stomp to the gut. Henry kicked out of a flying reverse DDT and a hangman’s neckbreaker. Henry reversed Anger Management with a tombstone piledriver and Slim kicked out. Awesome sequence. Henry went for the kill shot to the head and J caught him with an inverted STF. Henry was desperate to get to the ropes, Slim hauled Henry back to ring center but Henry got the ropes with last gasp effort. Slim once again tried for Anger Management. Henry escaped and rolled Slim up using the tights. This match was a war that told a story with believable close calls leading to the finish. Both men looked great.

Billy Buck said he was sick of Carnies and therefore Team TAG was upping the ante and making it an anything goes match. Kerry Awful said Tripp Cassidy wasn’t there and he might hate Nick Iggy but he would deal with Iggy tomorrow and it ain’t tomorrow tonight. Awful attacked Buck…leading to….

(6) The Carnies (Kerry Awful & Nick Iggy) defeated Team TAG (Kevin Blue & Chris Spectra & Billy Buck) in an Anything Goes match in 5:36. This was a wild brawl with Carnies more than holding their own despite the odds. While the ref was mixed up in the maelstrom on the outside, Awful had Spectra covered in the ring so Griffin made a quick three count.

Griffin reminded an enraged Team TAG that the rules were anything goes. Blue said Griffin screwed them every chance he got and challenged Griffin to get in the ring, then pulled the plug on the Carnies’ music on his way out.

Griffin called SFCW promoter David Manders to the ring to thank him for his help and named off the Georgia wrestling awards SFCW had won for 2018.

Griffin said the ACTION match for the Independent Wrestling TV event during Wrestlemania weekend would be Yehi vs. the ACTION Champion and announced Bandy vs. Edwards and an ACTION title defense for March 22 at Sandy Creek High School in addition to Royal vs Yehi.
ACTION Champion AC Mack initiated ring announcer Lavender to the task of holding Mack’s title over his head while Mack introduced himself. Mack said he stepped into a ring for the first time three years ago. He was still kicking it and a certain Ike Cross was not. He retired Cross who fell to the same man Cam Carter was about to fall to.

(7) AC Mack defeated Cam Carter to retain the ACTION Championship in 12:55 . Carter controlled the early going. Mack raked the eyes and began to stalk his prey. Carter answered with a german suplex and a knee strike that dropped Mack like a bad habit. Some killer exchanges ensued. Carter was looking for the 450 so Mack wisely rolled out of the ring. Carter nailed Mack with a tope and followed with a springboard 450 for a near fall. Carter tried for the Limit Breaker. Mack escaped. Mack busted out a front flip piledriver that was off the hook. Mack was in exasperation mode when referee Daryl Hall insisted Carter kicked out before the three count. Mack inadvertently obliterated Hall with a back elbow. Carter then gave Mack Anger Management to score a visual three count. Second referee Aron Noyes hit the ring to count but by that point, Mack was able to kick out. Carter went up for the 450. Mack met him at the top rope with a climbing enzuigiri and hit a draping DDT. Noyes counted three but Carter’s foot was clearly on the ropes.

Mack’s first title defense proved he was worthy of being ACTION’s first champion. Carter’s had one great match after another at ACTION. The work was super smooth without appearing choreographed and they were varying speeds like a real fight.