The red, white and blue took centerstage as Peachstate Wrestling Alliance presented “Justice For All” at the VFW Fairgrounds in Carrollton, GA on July 5.

This is a wrestling company that understands their fan base. The main event: USA (Rick Michaels) vs. France (Romeo). The stipulation: the loser has to sing the winner’s national anthem.

At this juncture, Peachstate appears to have the edge in momentum among Georgia wrestling promotions. “Justice for All” drew 235 with all tickets at half price ($5). They did 225 last week and 300+ for their anniversary show on June 14. That’s as good as it gets for Georgia indies in 2014. 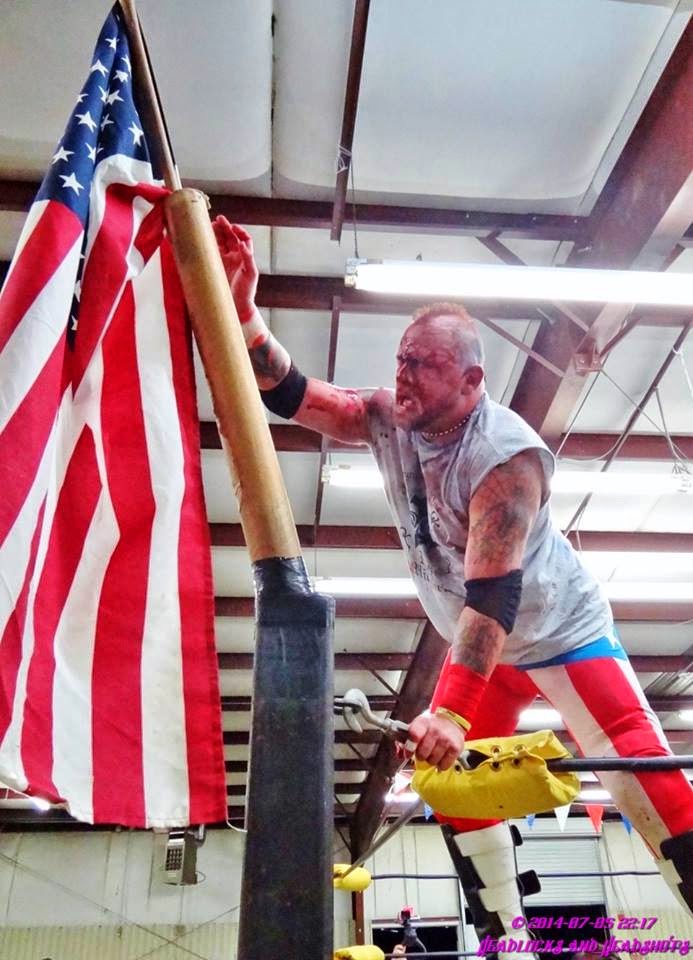 "Justice for All" was an angle driven show  -- all gaga on top and gaga works in Carrollton. The real heat angle is Simon Sermon vs. former 13 year partner Tommy Too Much. Who would have believed that PWA could get this much mileage out of The Exotic Ones feuding every which way? Or that Carrolton would embrace two gay babyfaces at the top of the card?

The radical change in PWA is the undercard. The technical quality is so much better than it was a year ago. The roster is deeper. PWA is exposing their fans to a greater variety of match styles, and they do a good job of changing up who they use so it stays fresh.

PWA doesn’t need as much depth as Anarchy. They’re doing a 5-6 match card vs. 7-9 at Anarchy. I feel compelled to note that way back in the day, 5-6 matches was the standard card length. That was sometimes enough and never too many. And a show rarely ever ran longer than two and half hours.  But I digress…On to the show….


Promoter Shane Noles introduced Dusty MacWilliams who has been out of PWA for over a year due to a neck injury. Damn that guy is over amazingly huge. He may be from Alabama but the fans in Carrollton treat him like one of their own. Dusty said his doctor had given him the OK to return to the ring. “Dusty’s ready and we can ride this rodeo all night long, baby.”

The appearance of Ultimate Dragon  the occasion. Dragon said MacWilliams hadn’t wrestled in a long time because somebody like him would snap his back. “You’re in Dragonville. Ride this dragon right now.” MacWilliams said cowboys don’t back down from anything.

Dusty MacWilliams defeated Ultimate Dragon in an impromptu match. Dragon went for a chairshot. Referee Tristan Michaels showed up just in time to grab the chair and Dusty schoolboyed Dragon for the 1-2-3. Timing is everything.

Dragon said that was no match because the bell never rang. Fans chanted “you got beat” at Dragon. Crazy, crazy heat for all of this.

(1) Fred Yehi defeated Bobby Moore via submission in 6:10. Moore was making his PWA debut. He started beating on Yehi right from the opening bell. Yehi fired back with chops, and it turned into a solidly worked back and forth bout. Twice Moore went for the discus elbow and Yehi blocked it both time. The third time was not the charm for Moore, as Yehi countered with the Koji Clutch. It’s heartening to see a superior technical wrestler like Yehi become as popular as he has with the Peachstate fans.

(2) NWA Georgia Heavyweight Champion Tyson Dean defeated Drew Adler via submission in 11 minutes. Dean is in great shape and looks the part of a champion. His work was fine, but he didn’t play to the crowd enough to get good heel heat in Carrollton. I haven’t gotten to see Adler wrestle much since Rampage shut down and it’s always a pleasure. Chain wrestling based around the armbar to open the match. Dean used a spinning armbar to take control and went to work on Adler’s shoulder. Adler used a shoulder block that didn’t do his shoulder any favors. Adler hit his signature full speed flip dive to the outside and the Drew Drop (Air Raid Crash) for near falls. The finish saw Adler miss a high kick and get hung up in the ropes. Dean then suplexed Adler on his head and submitted him with a shoulder lock. Matches based on technique and psychology have not been the usual fare in Peachstate, but I do believe their fans are starting to appreciate them.

Noles said the triple threat match for vacated Georgia Junior Championship was off. Former champion Kevin Blue’s elbow was swollen to three times its normal size. Jimmy Rave wasn’t there either, so Noles awarded the title to the only competitor that showed up – Ace Haven. Ace said he didn’t want to win by default and asked Noles to get him another contender so they could settle it in the ring. Out came Fred Yehi.

(3) Fred Yehi defeated Ace Haven (with Amy Haven) in 14:45 to win the vacant Georgia Junior Championship. Haven has worked at his craft and has become a much better professional wrestler. He’s not on Yehi’s level as a technician but he was able to hang with him just fine. Yehi checked for a loose tooth ala Davey Richards after eating a dropkick to the mush. Ace sent Yehi over the top with a shadow clothesline and followed with a tope and a flying headscissors. Ace hurt his knee on missed running boot, and Yehi dissected the damaged body part. When Ace tried for a diving headbutt, Yehi caught him with the Koji Clutch, but Ace managed to hook the ropes with his feet. Yehi kicked out of Ace’s springboard kick finisher. They went back and forth with pin attempts and attempted finishers until a dueling small package hold ended with Ace’s shoulders on the mat. It was unclear who won, but referee Terry Hudgins raised Yehi’s hand.

Postmatch, Ace offered a handshake and raised Yehi’s hand. Haven’s situation is interesting. Until recently, the Peachstate fans despised the Havens, but he’s now positioned to go either face or heel. There was a point in the match where fans were split with some fans chanting for Yehi and some for Ace.
Tommy Too Much came to the ring for his match with Simon Sermon. Too Much had said he would only face Sermon if Sermon paid him $5000 in the ring. Sermon marched to the ring with an envelope. He was all business tonight. Too Much said he didn’t Sermon and called yours truly to the ring to verify that the money was real. Sermon pulled a wad of Benjamin Franklins out of the envelope and counted them one by one. There were 51. Sermon said the extra $100 was a tip for services rendered. Too Much stuck the money inside his boot and sealed it with duct tape.

(4) Simon Sermon defeated Tommy Too Much by count out. At the opening bell, Too Much ran out of the ring and took the 10 count from Jeremy Black. That pissed off the fans but the people weren’t half as pissed as Sermon.

Sermon said he was going to get his fat ass a chair and sit in the ring until Too Much got his ass back out there.

(5) Dusty MacWiliams won the Quest for the Cup Battle Royal in 7:40. Sermon was still sitting in the ring when the match got underway. The other competitors were Moore, Adler, Dragon, Dean, Yehi, Haven and Beautiful Bald Besties (Michael Stevens & Zac Edwards). As Sermon was dumping Stevens out, Too Much ran in and gave Sermon the heave ho. Too Much ran to the back with Sermon in hot pursuit. It came down to MacWilliams and Dragon. MacWilliams tossed Dragon over the top rope, but Dragon hung onto the rope and landed on the apron. MacWilliams snapped Dragon’s throat off the rope for the win.

MacWilliams received the trophy and was on the receiving end of a sneak attack by Dragon, who broke the trophy on Dusty’s neck and beat on him with the remains until the refs pulled him off. MacWilliams never moved a muscle. PWA personnel cradled MacWilliams like a human stretcher and carefully carried him to the back. You know. The way it’s supposed to look when someone has a serious injury…and it’s a a potential money angle.

Akbar came out to introduce Romeo for the main event and got instant heat. Rick Michaels did his fire breathing entrance and egged on the “USA” chant.

(6) Rick Michaels defeated PWA Heritage Champion Romeo (with Akbar) in a flag on a pole match with 10 fans with straps at ringside at 12:14. Romeo jumped Rick. The “USA” chant ramped up. Michaels tossed Romeo out to the fans, but he was wearing multiple layers of protection. Michaels stripped him down. One lucky lady eventually got in a shot on bare skin. Romeo tossed Rick and went ballistic because the fans just got cozy with him. Akbar removed the top turnbuckle pad in Romeo’s corner. Romeo went for the French flag, but Michaels crotched him the exposed turnbuckle and stomped on his groin. As comedy heels go, Romeo bumps and sells with the best of them and this match was no exception. Michaels went for the American flag and Romeo cut him off. Romeo went for his flag and Michaels cut him off with a powerbomb. Michaels went for the American flag and Akbar grabbed his leg. Romeo catapulted Michaels’ head into the exposed turnbuckle. Michaels bled heavily, but rallied with the Double Shot. HIs agonizing climb for the flag was cut off at the last split second by Romeo. Michaels busted the facebuster/superkick combo out of mothballs and nailed it. Romeo was toast. Michaels wiped the blood out of his eyes and grabbed the flag. A story match primarily but with enough action to satisfy. 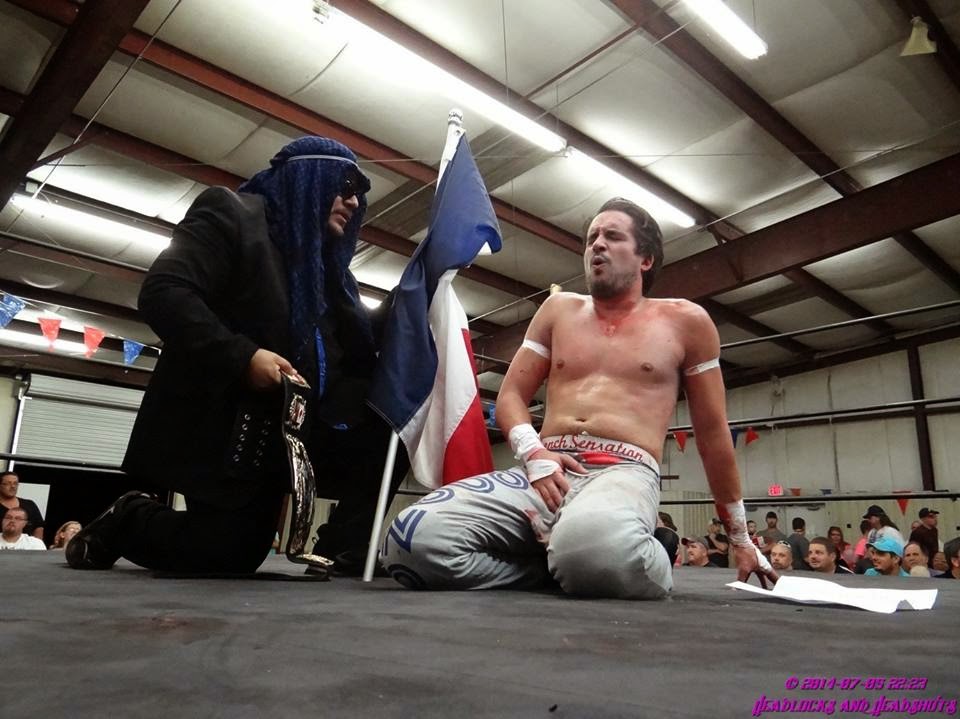 Michaels told “Pepe Le Pew” he had some singing to do and handed him the lyrics. Romeo said no way. Michaels said he could have Noles come out and fire him or suspend him or some other kayfabe crap (his words not mine), but he was just going to kick his ass. Under duress, Romeo decided to sing. This was even worse than when Romeo sings the French anthem. Romeo kept screwing him, so Michaels gave him a low blow on “free” and finished the last line for him. Not a great wrestling match by any means, but it was very entertaining and appropriately sent the fans home happy on a holiday weekend.
Posted by GWH News at 6:47 PM