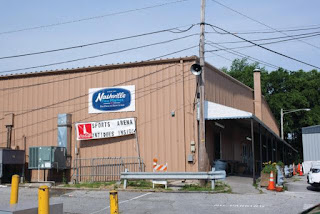 NWA Wildside had its first TV taping in September of 1999 & just a few months later, I got my first booking in Nashville. I’m not sure how it all came together, I believe Larry Goodman had recommended me to Bert Prentice & then maybe Bill Behrens signed off on it. It was a huge deal to me as I was a huge fan of the Memphis territory, & Nashville is a classic wrestling city. The Fairgrounds, then known as the Mecca had been built for pro wrestling & anyone & everyone I could think of, had wrestled in that building.

I recently watched a match between Jackie Fargo & The Original Sheik in the Fairgrounds. I love knowing that I performed in the same building as these legends, as well as so many others. However, this first time was not at the Fairgrounds but a TV taping at Coleman studios. I would be managing a guy named Goth. He was a big green as grass vampire. He had the white puffy shirt, cool pants, some fangs, long hair & some good size. All things that I was very excited about. 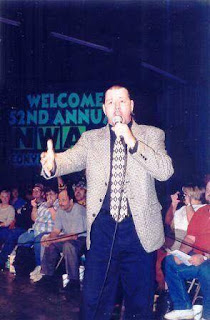 I had been doing TV for APW in SC the previous two years & now Wildside but honestly I was still green as fuck, he was even greener & here we were meeting for the first time & making our debut together at a TV studio for Music City Wrestling in Nashville Tn.

He barely had a clue about anything, but I had zero concerns. I’ve always said give me any big guy & if he can do a big boot & a choke slam without falling down, I can get him over. That’s still true, with the caveat his opponent actually has to get up for the choke slam.

I was so enthusiastic about my debut, I had asked Bert if I could hit the ring after the finish & get some extra heat stomping the guy with Goth. He vetoed that idea & that’s the first time I learned, on smaller artistic decisions, it is better to go with your gut instead of asking permission.

We go out for Goths big debut squash & we’ve put together something short & impactful for him & it’s going well until, when it’s time for the finish, he hooks the guy for the choke slam & dude gets like two inches off the ground. Goth instead of fixing it, just covers him for the win & I nearly had a stroke right then & there.

Well my blood is boiling as this jobber mother fucker has fucked our debut & I can’t hit the ring to try & save it because by asking earlier, I’d already been told not to. In retrospect, I should’ve done it anyway but I was still too green to make that executive decision.

We get to the back & when the jobber came through the door, I tried to charge & attack him. Goth grabs me & is holding me up and my legs are still trying to charge this guy. It’s my first time there & I’m nobody so some decorum should’ve been present, but I was completely over the edge.

I’m screaming you fucking mother fucker & every other curse you can imagine at this guy as Goth is holding me back. He just met me that day so he’s like what the fuck, the jobber is cowering despite being much bigger than me & I'm in a full blown frenzy. Goth is too green to know how bad he’s fucked up his debut, but I know & I know we’re both fucked.

We only got the one squash match & then post show we shoot a promo for an upcoming show in Lebanon Tn. Well, that went about as well as the match. I’m cutting my promo & because I’m overcompensating for the disastrous match, I want to do it multiple times. I thought if this is it, I’ve got to have a perfect promo.

Unfortunately I was too caught up in my own shit to properly read the room & see how irritated Bert is getting with me. It was late & I’m thinking now, he definitely didn’t want to hear me say another word. It’s not like it had gotten any better than the first one. I just kept wanting to go again.

He didn’t say anything about me losing my shit on the jobber but I think he’d heard about it or more likely just heard it as it wasn’t quiet. He let me finish but I’m sure he’d already made up his mind, that I wasn’t coming back. I remember sitting in the Super 8 hotel room that night thinking I had most assuredly blown this opportunity.

He cancelled me off the Lebanon show. I’m not sure if Goth made that show but he was as gone, as I was after that first taping & never seen again. After all that screwing around with the promo, Bert aired like ten seconds of it & that was the end of my Nashville debut. I believe Bill told me that Bert said “Jeff doesn’t have the right temperament for Nashville.” It probably wasn’t that nice.

Needless to say it was devastating news. I had gotten an opportunity in Nashville to be a part of MCW that would lead to getting to work in the Fairgrounds, The Mecca, but I had fucked myself in one night. In my defense, if that guy had gotten up for the choke slam, things would not have turned so ugly so quick.

It likely wouldn’t have lasted anyway as Goth ended up doing nothing in wrestling beyond that taping that I’m aware of, but there will always be a What If in the back of my mind.

I returned to Wildside with a bruised ego, but soon forgot, as we turned our hometown hero & most popular guy in the building heel. That guy was AJ Styles. I thought they were crazy to turn AJ, he was our Ricky Steamboat & I wondered will the crowd even boo him? It was an unfounded worry as AJ turned on the smarm & became a great heel. We had some fantastic moments together that rank high in my pantheon of greatness but one of my favorites is our night at the NWA 52nd Anniversary show.

It had only been a few months since my Nashville failure but this time I’d be performing in the Mecca & I’d have AJ Styles with me, as well as Onyx & Wildside owner Steve Martin. AJ would be wrestling Lazz. For those unfamiliar with Lazz, I’d describe him as a male Britney Spears impersonator who’d dance around the ring & did some of the classic Adrian Street style spots mixed with modern wrestling. He was as over as any guy in our building & he got over everywhere I ever saw him do his act. It truly was one of those you have to see it to believe it kind of acts. 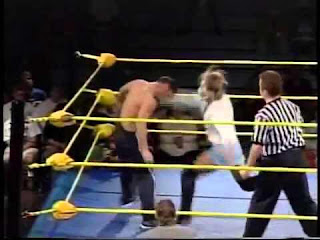 Nashville was no exception & we had primed the pump with a particularly offensive promo talking of Lazz hustling down in front of The Ramrod & The Mineshaft. The match itself was full of classic buffoonery, with Lazz winning by DQ & then humiliating Steve, Me & referee Andrew Thomas. We were the opening match on the show & set the tone for what turned out to be a high quality night of wrestling.

There was a post show party at the Opry Mills mall. They had given out some awards and I believe the Rookie of the Year ‘Kodiak’ was the person throwing the party. Stuffs going to be a little fuzzy from this point on as we started drinking hard at this party.

AJ refused to go in the bar so we were hanging out near the dance floor. I was a huge fan of AJ being able to do a standing flip & would have him do it in his introduction. I somehow talked him into doing it that night & when another wrestler who was clearly intoxicated suggested he could do that too, we gave him his space to try.

I remember helping him up off the floor after a nasty crash & burn. Seeing how this was a wrestler party, strip club was soon the destination point everyone wanted. One of the boys worked the door at Deja Vu so off we went. Needless to say, AJ did not come with. The photographer who conveniently drove a station wagon offered to drive us all & off we went.

There was a huge man in the front seat who later went into law enforcement who got very upset when someone lit a joint in the car. He said something to the effect of, if that shit isn’t put out immediately I’m killing every one of you. Needless to say it went out immediately.

We arrived at Deja Vu & decided to smoke the joint outside the car before going in. You know that you’re drunk & completely full of your own shit when you just walk up to the door still smoking like you own the world. We were definitely feeling that way that night.

When we went in, I slapped some guys hat off his head, just cause. When he bucked up, our big man asked if there was a problem, the answer was no. The big man, then told me if I do that shit again he'd be the one to whip my ass. I didn’t do it again, ever. We hung out, drank, & watched girls dance before calling it a night. That’s all I can remember of our time at Deja Vu.

I’m far too soused to take advantage of this incredibly tempting offer when someone else in the elevator says I’ll take one. I get off on my floor & go to bed. The next morning I find Mr 2 & 2 asleep in the lobby as he regales us with a story of the pimp busting in & beating on the hooker right as he's finished up.

He grabs his money off the table as he exits & since he’s forgotten his room number, heads to the lobby to sleep. A classic moment in a night full of them. Names have not been used for a reason, so don’t put anyone’s business out there in the comments for others to see.

This was an amazing trip & I guess I proved I had a better temperament as Bert started booking me some in Nashville. I was always incredibly grateful as it was well known certain managers had paid Bert to work his shows. The fact that he paid me well & provided me a hotel room makes him one of my favorite promoters I ever worked for. Not to say he didn’t cuss me like a dog on almost every show for something, but I’m sure I always deserved it. The Mecca aka The Nashville Fairgrounds holds a lot of great memories for me, but this one is near the top & yeah I even worked the show where Jim Cornette spit on Ed Ferrara.
Posted by GWH News at 9:30 PM